Social media usage differs by age group and the period for a person in Canada. For example, those who are born in Canada, which is just 9% of those surveyed and who are within an age group of 31, are the most active social media users using Instagram (63%), Facebook (62%), WhatsApp (47%), and Twitter (42%).

South Asians who have been in Canada for more than ten years tend to use different social media platforms similarly to North Americans. Facebook (58%), Instagram (42%), WhatsApp ( 68%), and LinkedIn (35%).

The below-mentioned graph shows the number of social network users in Canada from 2017 to 2026. 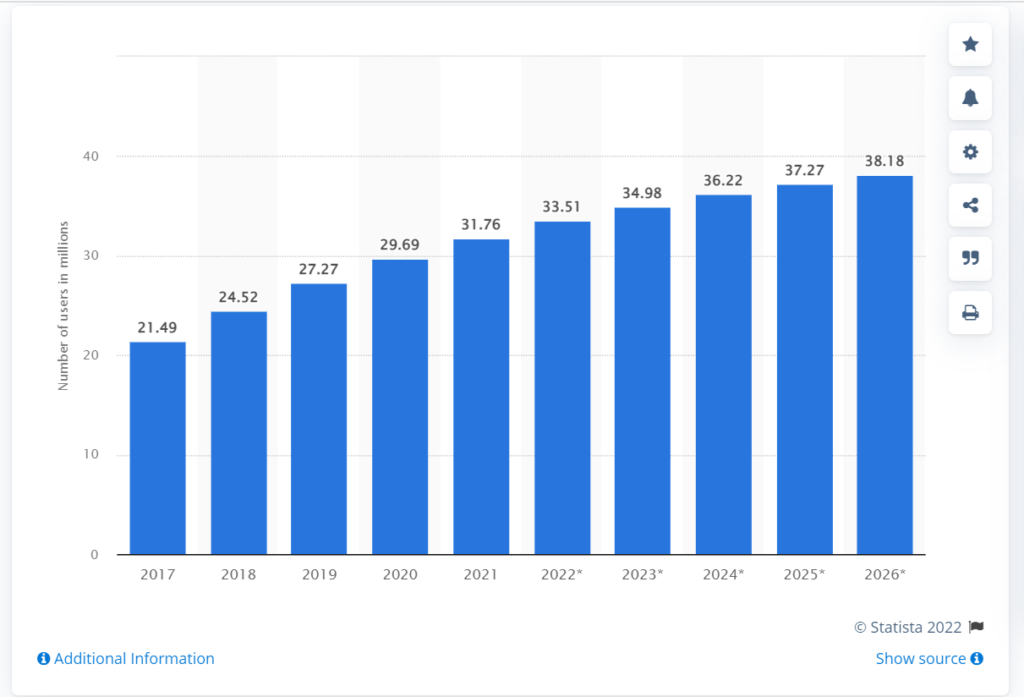 Chinese Canadians are major internet users compared to the national average. The internet is the most popular ranking media with Chinese Canadians, followed by radio, TV, magazines, and newspapers.

Chinese Canadians are likely to be heavier internet users by a massive 25%, with their two most popular apps being WeChat and Facebook. They mostly use WeChat for chatting with family members. 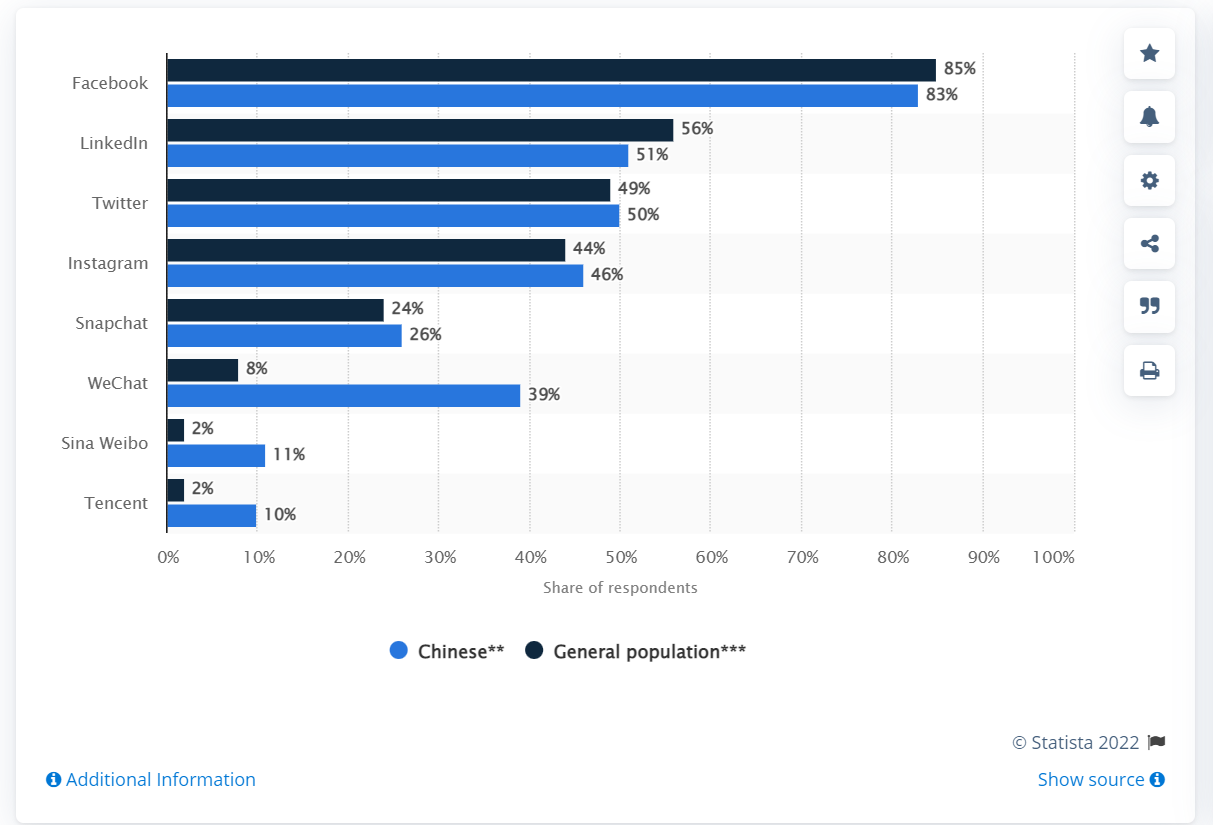 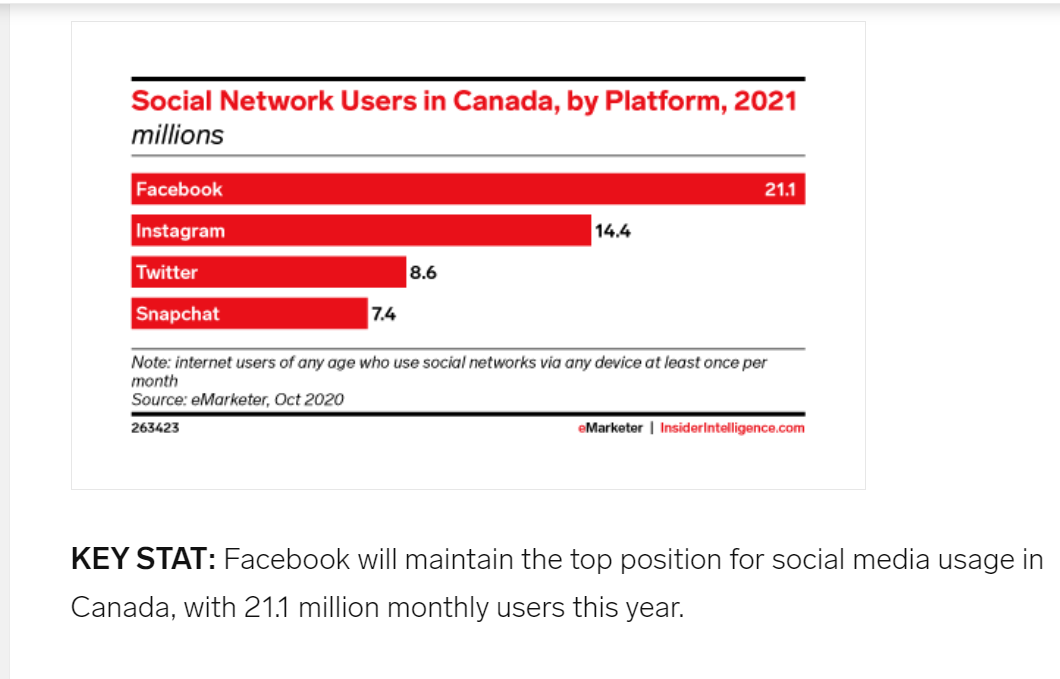 Live broadcast TV is still in demand across all age groups, but the younger 18-to-34 age group watches less live broadcast than the older groups.

We use cookies on our website to give you the most relevant experience by remembering your preferences and repeat visits. By clicking “Accept All”, you consent to the use of ALL the cookies. However, you may visit "Cookie Settings" to provide a controlled consent.
Cookie SettingsAccept All
Manage consent

This website uses cookies to improve your experience while you navigate through the website. Out of these, the cookies that are categorized as necessary are stored on your browser as they are essential for the working of basic functionalities of the website. We also use third-party cookies that help us analyze and understand how you use this website. These cookies will be stored in your browser only with your consent. You also have the option to opt-out of these cookies. But opting out of some of these cookies may affect your browsing experience.
Necessary Always Enabled
Necessary cookies are absolutely essential for the website to function properly. These cookies ensure basic functionalities and security features of the website, anonymously.
Functional
Functional cookies help to perform certain functionalities like sharing the content of the website on social media platforms, collect feedbacks, and other third-party features.
Performance
Performance cookies are used to understand and analyze the key performance indexes of the website which helps in delivering a better user experience for the visitors.
Analytics
Analytical cookies are used to understand how visitors interact with the website. These cookies help provide information on metrics the number of visitors, bounce rate, traffic source, etc.
Advertisement
Advertisement cookies are used to provide visitors with relevant ads and marketing campaigns. These cookies track visitors across websites and collect information to provide customized ads.
Others
Other uncategorized cookies are those that are being analyzed and have not been classified into a category as yet.
SAVE & ACCEPT

We have received your message and someone from our team will contact you soon.

Please fill the form to receive our media deck

We have received your request. We will send you the Media Kit to your email shortly.